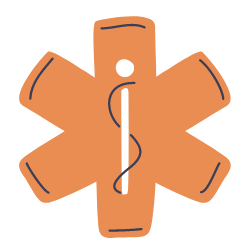 It’s not a great time to be an LGBTQ+ person seeking healthcare in the United States, given recent political efforts to criminalize some types of trans-affirming healthcare – but there are additional barriers for those with complex and often misunderstood chronic illnesses. LGBTQ+ COVID-19 “long-haulers” (a patient-coined term for people who developed long-term symptoms following a COVID-19 infection) sit at the intersection of these challenges.

Both COVID-19 long-haulers and LGBTQ+ populations have reported negative healthcare experiences. According to a 2021 report from the Center for American Progress, close to 50% of transgender people and 68% of transgender people of color report being mistreated by medical providers, experiences that can deter future attempts to seek care. The same report found that trans adults were significantly less likely than cisgender adults to attend regular doctor’s visits or have received annual flu shots.

Long COVID patients have similarly reported encountering under-educated medical providers, who sometimes misattribute mysterious-seeming multi-systemic symptoms to psychological illnesses, like anxiety. This phenomenon is not unique to the Long COVID community; for years, people with Myalgic Encephalomyelitis/Chronic Fatigue Syndrome (ME/CFS) were written off as having a psychosomatic disease. Historically, ME/CFS may have been misdiagnosed as “hysteria,” especially when it presented in women.

When Sage,* 26, called emergency services because their Long COVID symptoms were making it difficult to breathe, they were told they were exaggerating. “I didn’t believe myself for a long time,” Sage said. “But I have done a lot of…research, sought professional help, and now know that what I went through and am still going through is because of COVID.”

It wasn’t Sage’s first bad healthcare experience. As a transmasculine non-binary person, Sage has frequently been misgendered by medical professionals and feels that the care they’ve received since coming out has been colored by their identity. “It’s been so bad, in fact, that to this day I don’t seek medical care when I should,” Sage said.

Erica Russo, a queer long-hauler in Massachusetts expressed a similar sentiment. “I feel uneasy about my sexual orientation and queerness at doctor appointments,” she said. Similar to Sage, Russo says she had “many negative medical interactions” prior to COVID, which included medical malpractice and sexual harassment. “It is always a question in my mind whether I am safe or not.”

Russo, who attends doctors appointments with her partner who is now her full-time caregiver, has been able to access a clinical diagnosis of Long COVID from both a neurologist and cardiologist. But, Sage is still trying to get a diagnosis. “I would love to be a part of a study or…go to a specialty clinic,” they said. “I just haven’t had the resources or been able to.”

Navigating the bureaucracy necessary to access comprehensive care can be energy-draining, and many COVID-19 long-haulers deal with post-exertional symptom exacerbation – the temporary or permanent worsening of symptoms following mental, emotional, or physical exertion. Russo said she has attended hundreds of appointments over the past year and a half and has seen over twenty different doctors.

Gabriel San Emeterio, the co-founder of the Network for Long COVID Justice, said navigating medical systems is often harder for people trying to find providers with experience in both LGBTQ+ populations and complex chronic illnesses. San Emeterio lives with multiple chronic conditions including HIV and ME/CFS, and has personally experienced this struggle. “It means more providers, more time seeking care,” they said. San Emeterio said their LGBTQ+ providers are very educated on HIV, but San Emeterio has had to educate them about ME/CFS.

San Emeterio also expressed concerns that LGBTQ+ long-haulers may face greater barriers to accessing treatments, like Paxlovid, which is currently being prescribed for acute COVID infections but may also alleviate some Long COVID symptoms (though more research on this is needed). Paxlovid is known to react to other drugs, including statins – which are often prescribed to people with HIV – and some hormone therapies. “There’s a lot of considerations for folks who are trans or HIV positive, and we know the community has [high] rates of both,” San Emeterio explained.

LGBTQ+ people are also more likely to be uninsured, which creates significant barriers to accessing care for Long COVID, and makes it harder to test for COVID-19 – now that free tests are only available for those with health insurance. Access to testing is important as it can help patients catch COVID-19 infections in the early stages and avoid infecting others. A positive test result also often proves crucial in securing long-term care, should Long COVID symptoms develop.

Lack of insurance is often due to job status; LGBTQ+ populations experience greater income and housing insecurity and workplace discrimination – issues that many COVID-19 long-haulers are also facing. A study conducted by the Patient-Led Research Collaborative found that 45% of Long COVID patients surveyed required a reduced work schedule. Roughly 22% were not working at all due to their illness.

Loss of income is especially difficult when coupled with rising medical costs – a common feature of the more specialized healthcare many LGBTQ+ long-haulers require. San Emeterio recounted having to pay hundreds of dollars out-of-pocket for a short email exchange with one of the few ME/CFS educated providers in New York City, and a medication that is not covered by insurance.

In the absence of financial support or widespread clinical knowledge, many long-haulers are turning to their communities for help with at-home care and managing logistics like the medical bureaucracy Russo and San Emeterio described. But, LGBTQ+ folks are more likely to be estranged from their families of origin, which can mean fewer options for support. Luckily, queer and trans communities have long histories of community care. “We care for each other mutually,” said San Emeterio, who described visiting friends who are long-term HIV survivors.

Sage and Russo similarly said they’d turned to LGBTQ+ communities for support. Russo has been able to cover the cost of most of her medical supplies and living expenses from GoFundMe donations. Sage is in the process of setting up a virtual support group of their own for LGBTQ+ long-haulers in their area. “I’ve had a lot of emotional support, and I’ve had people validate my experience,” Sage said. “The queer and trans disabled community has been such a backbone.”

Fiona Lowenstein is a journalist with bylines in The New York Times, Vox, and The Guardian, and the founder of Body Politic, which began as a queer feminist wellness collective and is now a patient-led Long COVID advocacy organization with a popular patient support group. They are also the author of “The Long COVID Survival Guide,” an upcoming a peer-to-peer advice book on Long COVID.